Several other county and village officials were present for the tour. Following the site visit, Ossenfort provided an update and answered questions at the Village Hall.

“I appreciate the Congressman’s visit to Canajoharie,” Ossenfort said. "We had a productive discussion and I’m encouraged that we can work together in the future as our team begins to look into allocating potential funding sources to continue progress at the site." 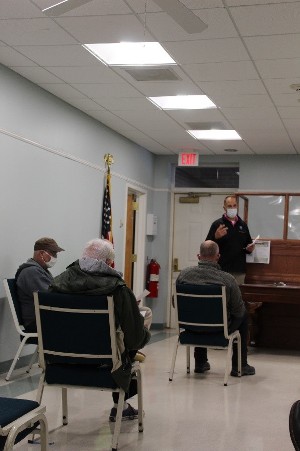 “Grateful for the opportunity to join Montgomery County Executive Matt Ossenfort and local officials to see the Exit 29 Redevelopment Site and hear more about their work to revitalize these facilities,” said Rep. Antonio Delgado. “The County’s efforts to reinvest in this area are critical for creating jobs and economic development in the Mohawk Valley. At the federal level, I will continue to advocate for these important infrastructure projects, and work to advance my Rebuild Rural America Act—which creates multi-year, non-competitive block grants to bring targeted and direct investment to localities across upstate NY.”

Ossenfort estimates the bid being awarded in January, with work convening on the site in February.

Click here for more information and updates on the site.*